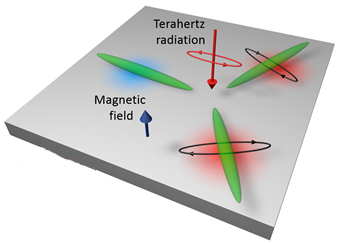 Valleytronics is an emerging field in electronics, where one plays with the momentum of electrons rather than with their electric charge. As the attainable momenta cluster near the minima (the so-called valleys) of the conduction band, the electrons effectively acquire an additional valley index, similar to the well-known charge and the spin. This extra ‘flavor’ can be used, for example, to encode a bit of information. Since the valley manipulation does not involve electric current, valleytronic devices are expected to dissipate much less energy than the conventional transistors. One of the main challenges in valleytronics is to populate different valleys selectively while they are equally populated under standard conditions. Based on their state-of-the-art magneto-optical experiments in a very pure bismuth crystal (a textbook semimetal and also a jewelry material), UNIGE scientists propose a novel approach to optically ‘pump’ carriers valley-selectively.

Their idea consists of the following. In some materials, like bismuth, the electronic orbits in magnetic field, instead of being circular as in particle accelerators, are strongly elongated along one direction due the interaction with the atomic lattice. Importantly, this direction is unique to each valley (in bismuth there are three of them) and therefore can be used as a key to discriminate them. By illuminating such a material with an elliptically polarized terahertz radiation, where the ellipse elongation matches the shape of the electron orbit, one can selectively excite electrons in different valleys. Switching between the valleys can be achieved by simply rotating the ellipse. This approach may find applications in optical computing and quantum memory. The idea, however, is still to be tested with more dedicated experiments. This research is published in Physical Review Letters.